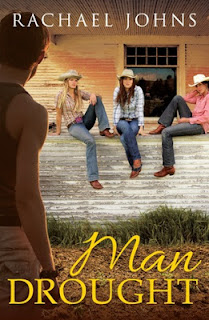 
Imogen Bates moved to the small rural town of Gibson’s Find to start a new life for herself after the death of her husband. Tired of being haunted by the painful memories of her old life, Imogen set her last remaining hopes on the little town and, in particular, pouring her heart and savings into restoring The Majestic Hotel to its former glory. But while the female-starved town might be glad to see a young woman move in, not everyone is happy about Imogen’s arrival.

Sheep and crop farmer Gibson Black once dreamed of having the kind of family his grandfather reminisces about, but he’s learnt not to dream anymore. Living in the mostly male town suits Gibson down to the ground...and he won’t have anyone — least of all a hot redhead from the city — change a thing.

Man Drought is the first rural romance book I have ever read and honestly, I am a convert.
Imogen buys an old hotel in a small country town, Gibson's Find, after the death of her husband, desperate to find a new start. She becomes passionate about restoring the hotel to it's former glory and breathing new life into the tiny community.
Gibson's Find like many other small country communities is mostly populated by men, and after a difficult marriage  that is exactly how Gibson likes it. But the other members of the community find Imogen's arrival refreshing and are more than happy to go out of their way to make her feel welcome and much to Gibson's frustration, he can't keep this redheaded beauty out of his thoughts.

It is impossible not to fall in love with the characters in this book. Imogen and Gibson are so determined and passionate, making it impossible for them not to lock horns, but they are also in their own ways slightly damaged which makes it impossible not not to feel their pain.
Although Gibson's grandfather Charlie, was my favourite character. Charlie is just the right mixture of sweet and stubborn, and he really brings the story together.

Rachael's writing style paints a perfect picture of country WA, for me it brought back memories of times spent on the farms of my friends, I could really picture dusty paddocks and smell the gum trees and sheep. Man Drought reminded me that despite my suburban upbringing I am really a country girl at heart, and the love of the country really does run in my genes.

Overall Man drought is a touching and heartfelt story of love, loyalty and community spirit. Easy to read and delightful, a great holiday read.

Thanks to Harlequin Australia for the ARC
Posted by Ceri at 14:04