Roll With It by Nick Place 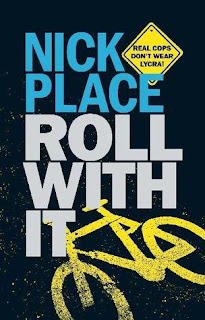 
Career cop Detective Senior Sergeant Tony ‘Rocket’ Laver is a policeman with issues. Sure, he may have been returning fire, but the fact remains that Laver is the sixth Victorian policeman to shoot a suspect in four months, and that’s all the politicians need to get involved. While the circus of an inquiry begins, Laver is moved from Major Crime to the Mobile Public Interaction Squad ... aka the mountain bike police. Bitter, struggling to cope with the fatal shooting – not to mention his flailing relationship, Rocket is now wearing lycra and getting a sore butt on his bike seat.
Laver’s friends and bosses in the force tell him to keep his head down until the storm blows over, but that doesn’t factor in Stig and the Wild Man, two genuine bad guys Laver encounters on Smith Street,Collingwood. In innercity and outer-suburban Melbourne, major crime is in the air. Lives might be in danger but nobody will listen to a cop on the outer.

Roll With It is not your typical crime novel. It took me a little while to get into this one, but once it started to pick up speed it rolled along at a nice pace. It was a refreshing read with a light smattering of humour and a wonderful mixture of colourful characters.
I recommend this book to someone looking for a light-hearted, fun, crime novel
Posted by Ceri at 12:38