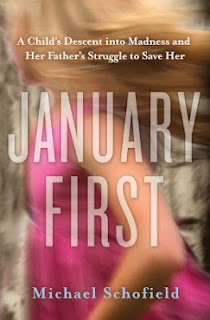 
January First is the extraordinary story of a father's fight to save his child from an extremely severe case of mental illness in the face of overwhelming adversity.

At six years old, Michael Schofield's daughter, January, was diagnosed with one of the most severe cases of child-onset schizophrenia that doctors had ever seen. In January's case, she is hallucinating 95 percent of the time that she is awake. Potent psychiatric drugs that would level most adults barely faze her. January, "Jani" to her family, has literally hundreds of imaginary friends. They go by names like 400-the-Cat, 100 Degrees, and 24 Hours and live on an island called "Calalini," which she describes as existing "on the border of my world and your world." Some of these friends are good, and some of them, such as 400, are very bad. They tell her to jump off buildings, attack her brother, and scream at strangers.

In the middle of these never-ending delusions, hallucinations, and paroxysms of rage are Jani's parents, who have gone to the ends of the earth to keep both of their children alive and unharmed. They live in separate one-bedroom apartments in order to keep her little brother, Bohdi, safe from his big sister--and wage a daily war against a social system that has all but completely failed them. January First is the story of the daily struggles and challenges they face as they do everything they can to help their daughter while trying to keep their family together.

I don't read a lot of memoirs but this one grabbed my attention right from the beginning. It is a raw and emotional read as you are placed in the middle of the lives of an extraordinary family who struggle daily with reality of mental illness. This book is not an easy read, there is no 'sugar coating' on the challenges that the family faces as they struggle to find help for their daughter and keep their family together while the illness tries to tear them apart.
An honest and heart wrenching view into the world of mental illness and how it affects not only the sufferer but also the family, January First is a book that will make you think twice before judging the family with the screaming child on the street and count your blessings. This book kept me up late into the night and lost for words.
Posted by Ceri at 12:24