One Hundred and Four Horses by Amanda Retzlaff 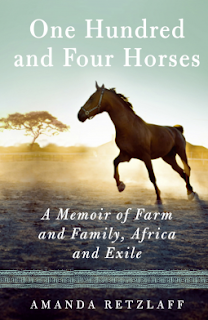 “A letter is handed to you. In broken English, it tells you that you must now vacate your farm; that this is no longer your home, for it now belongs to the crowd on your doorstep. Then the drums begin to beat.”

On an early summer morning in 2000, Mandy Retzlaff, was awakened by the knock she’d been dreading. Her closest, most beloved neighbours had come to tell her that the escalating violence surrounding them in northern Zimbabwe had finally landed on her doorstep. Surveying the damage of her friends’ farm, where outbuildings and beloved pets had fallen victim to the angry hands of a mob of Robert Mugabe’s war veterans, Mandy knew at once that her friends were lucky to have survived where others hadn’t, but also that her life, and that of her family, had changed forever. Her friend had only one parting request as she fled Zimbabwe for the safety of New Zealand. “We need your help.” She stopped. “It’s our horses. Something has got to be done about our horses.”


It was in this moment, the one where she felt more vulnerable than she ever had, that Mandy, along with her husband Pat, made the decision not to shrink into fear, but to reach out and help. And so they rescued a group of 104 horses from the violence of the home invasions, and in one case, quite literally from the jaws of lions. Each horse has a different personality and story: Grey, the silver gelding: the leader; Brutus, the untamed colt; Princess, the temperamental mare. Over the following months, as they moved across the Zimbabwean countryside, seeking ever more remote enclaves of safety for a herd of horses, it became clear that it was not just the family who were rescuing the horses, but the horses who were rescuing the family.

One Hundred and Four Horses is an intimate and personal glimpse into a country at war.

I can not even begin to imagine the trials and heartbreak this family had to endure. We tend to take for granted the 'basics', a roof over our heads and food on our tables, and to have that taken from you, to be forced to leave everything you had worked so hard for would be shattering. But despite the anger and fear the Retzlaff family found the courage and hope to fight, not only to save themselves and their own horses but also many others despite all odds.

This book was not an 'easy' read. The horrors that Mandy, her family, friends, and horses were subject and witnesses to defy words. But the courage, hope, and unbreakable bond between the family, their horses and the land is wondrous and inspiring.

Thanks to Harper Collins Australia and Netgalley for the ARC.
Posted by Ceri at 10:00