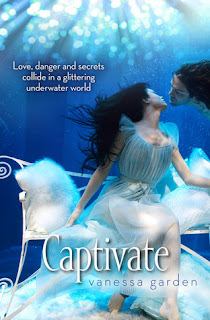 In a glittering underwater world, nothing is as it seems...

For the past twelve months since her parents’ death, seventeen-year-old Miranda Sun has harboured a dark secret — a secret that has strained the close relationship she once shared with her older sister, Lauren. In an effort to repair this broken bond, Miranda’s grandparents whisk the siblings away on a secluded beach holiday. Except before Miranda gets a chance to confess her life-changing secret, she’s dragged underwater by a mysterious stranger while taking a midnight swim.


Nineteen-year-old Marko intends to marry Miranda in order to keep his crown from falling into the sinister clutches of his half-brother, Damir. There’s only one problem. Miranda is desperate to return home to right things with her sister and she wants nothing to do with Marko. Trying to secure her freedom, Miranda quickly forms an alliance with Robbie — Marko’s personal guard. However, she soon discovers that even underwater, people are hiding dangerous secrets...

Captivate is a wondrous tale that is reminiscent of a childhood fairytale, a beautiful girl, a handsome prince (or in this case, a king) a kingdom in need of saving and plenty of secrets to keep you guessing.
The concept of an underwater city is one that I adore and Garden's carefully crafted world and descriptive writing transports the reader to a glistening hidden paradise.
The characters are well written, with strong and complex  personalities, making them easy to connect with. All of the main characters evolve nicely throughout the story
The only part of Captivate that I had a problem with was the romance between Marko and Miranda, it felt rushed. I think it needed a bit more time to develop.
Captivate, as it's name implies, is a captivating read that is beautifully written. I look forward to reading the next book in the series.

Thanks to Harlequin Teen Australia for the ARC.