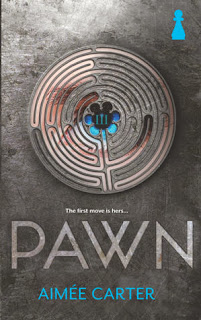 YOU CAN BE A VII. IF YOU GIVE UP EVERYTHING.

For Kitty Doe, it seems like an easy choice. She can either spend her life as a III in misery, looked down upon by the higher ranks and forced to leave the people she loves, or she can become a VII and join the most powerful family in the country.

If she says yes, Kitty will be Masked—surgically transformed into Lila Hart, the Prime Minister's niece, who died under mysterious circumstances. As a member of the Hart family, she will be famous. She will be adored. And for the first time, she will matter.


There's only one catch. She must also stop the rebellion that Lila secretly fostered, the same one that got her killed …and one Kitty believes in. Faced with threats, conspiracies and a life that's not her own, she must decide which path to choose—and learn how to become more than a pawn in a twisted game she's only beginning to understand.

I did not really know what to expect when I started reading Pawn, I have not any of Aimee's other books so I was not familiar with her writing style, but I have read my fair share of dystopians. As far as dystopians go Pawn does not shine out as being completely original. Does this make it bad? No, after all corrupt governments and underground rebellious groups are one of many things that make dystopians what they are.

I found the main character, Kitty, to be tolerable, at best, she is strong, smart and brave but I did not find her to be a very believable character. She makes some horrendous decisions that anyone (especially someone of only seventeen) would take a long time time and think very seriously about. . On the other hand, the secondary characters, especially the 'villains' were great. They were well written and their motives were not just black and white, but included lovely shades of grey.

Aimee's writing style is not overly complex with rapid pacing, making Pawn an easy and relatively quick read, even for a fairly slow reader like myself. I really enjoyed how, as the title implies, the story plays out much like a game of chess.

Overall, while Pawn was not an outstanding read it was enjoyable and I am interested to find out what happens next.

Thanks to Harlequin Teen Australia for the ARC.
Posted by Ceri at 08:33